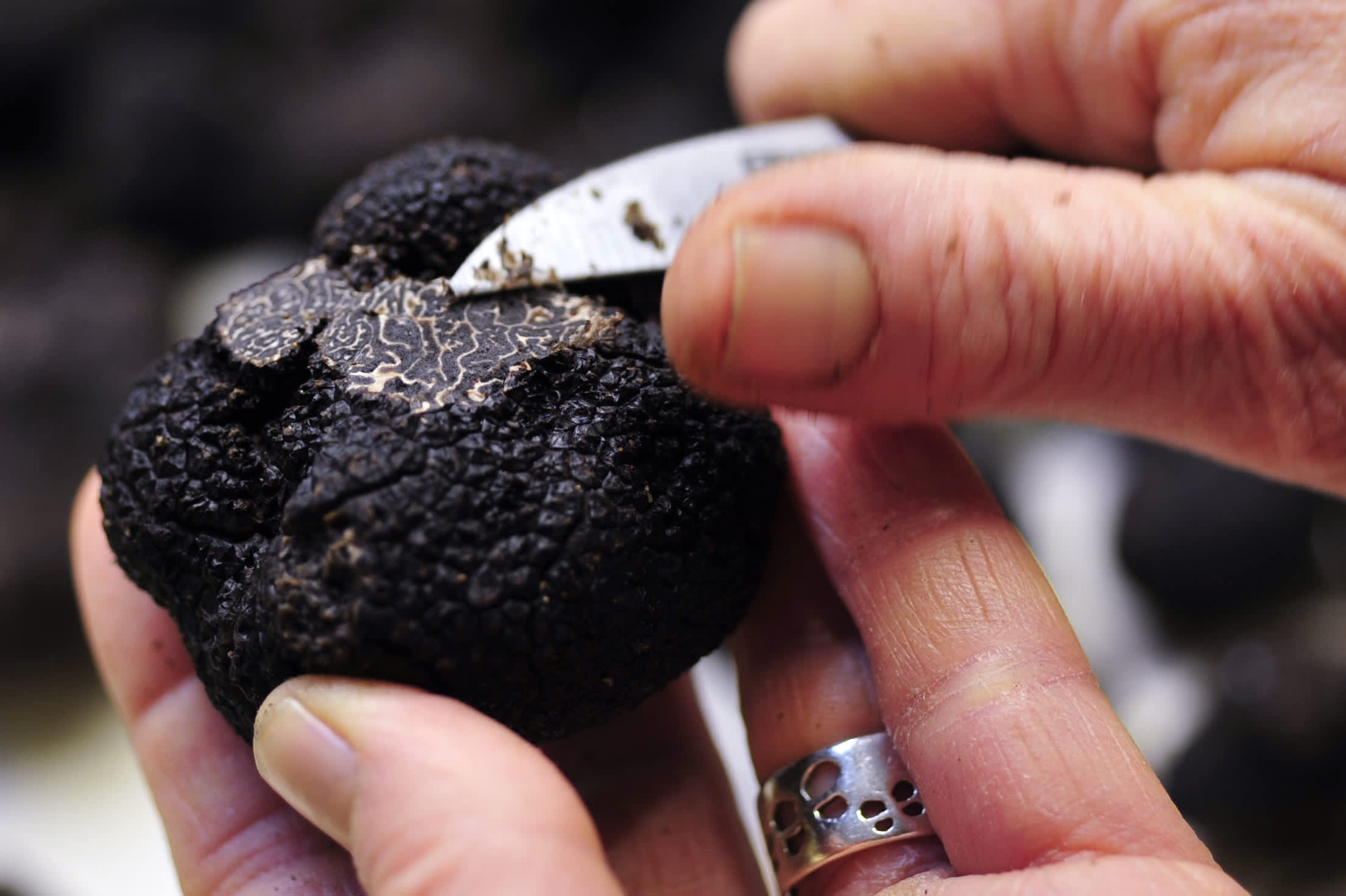 Much has been written about black truffle hunting in the French countryside, where Perigord truffles, or tuber melanosporum, thrive below oak and hazelnut trees.

But little is discussed about how these “black diamonds” are traded before they reach the hands of fine dining chefs around the world.

The interior of a black truffle is lined with white veins which darken with age.

If the very thought conjures up images of tightly organized auctions — the likes of bluefin tuna in Japan’s Toyosu Market, for instance — a trip to the village of Richerenches with Christopher Poron proves otherwise.

But first, how are truffles found?

These black diamonds in France are often found using dogs that are trained to locate the pungent fungi under the ground.

Poron is the president of Plantin, one of Europe’s largest traders of black truffles. The company supplies black diamonds to award-winning restaurants in Europe and Asia, including Odette in Singapore, named No. 18 on San Pellegrino’s World’s 50 Best Restaurants List in 2019.

A golf-ball sized nugget weighs just one ounce but can easily retail for $60.

During a “good harvest,” more than a ton of truffles can be traded on a single Saturday morning, said Poron, though a normal harvest is estimated to be slightly more than half this amount.

Truffles vary by size, but to get an idea of the price, a golf-ball sized nugget weighs just one ounce but can easily retail for $60.

“In the past, most of the buying of truffles was done through brokers,” said Poron. “These brokers would mostly meet the truffle farmers in markets like Richerenches.”

Indeed, since the first truffle market took place at Richerenches in 1923, the medieval village has evolved to become the country’s biggest annual truffle market. Ten to 12 tons of truffles are traded here every year.

Held every Saturday morning from November to March, the annual truffle market is an organized mess of mom-and-pop sellers (the farmers) proffering their goods to professional buyers (brokerage houses and truffle houses like Plantin) as well as the general public.

The Richerenches market is held on two streets: the main street, which is lined with stands selling truffles and truffle products to consumers, and a second street reserved strictly for professional buyers.

Trading on the professional street takes place from parked cars and vans. Buyers open their trunks to indicate they are ready to buy, and sellers walk from car to car showing off their weekly harvest. Truffles are weighed and purchased directly at the car and placed in the buyers’ trunks for safekeeping.

An open car trunk signals that a buyer is ready to purchase truffles from local farmers.

“The farmers come with their harvest. The price is set according to quality and what the buyer is ready to pay,” said Poron. “Once agreed, the farmers get paid mostly in cash.”

While Plantin has a history of buying from brokers and farmers, Poron confesses that 90% of the company’s purchases today are directly sourced from farmers.

A line forms at an open car trunk at the Richerenches truffle market.

The French farmers who sell their black diamonds to Poron at the Richerenches market are mostly vineyard owners, not professional truffle farmers as in Spain or Australia, since revenue from planting grapes for winemaking in France is perceived to be “more certain” than that of truffles.

Truffles are fragile, and climate dictates the health of each harvest.

‘No such thing’ as discounts

Unlike commercial transactions — where bigger volumes tend to attract lower prices — economies of scale don’t exist in the truffle trade.

“There is no such thing as getting a better price if I buy all the truffles or more quantities from each farmer,” he said. “In our business, we have to take care of our customers — not just the chefs, but also the farmers. If we don’t, they will sell their harvests to someone else.”

Truffle weighing and payment is done at the car trunk.

Plantin started planting black truffles in a 50-hectare truffle farm in another region of France several years ago. The farm is starting to bear fruit, but in minute quantities. With a harvest that averages 33 pounds a week so far this year, the truffle house can hardly be considered self-sufficient.

“We will never be able to depend solely on our own farm production because of the huge volumes we trade,” Poron said.

This is what makes the local farming community, and hence the Richerenches market, so important.

Thanks be to truffles

One of the most vaunted truffle events of the year — the “la messe de la truffe” or “the truffle mass” — is held in Richerenches on the third Sunday of every January. Held at the village church, the special mass is devoted to Saint Antoine, the patron saint of truffle farmers.

First held in 1952 by Richerenches priest Henri Michel-Reyne, the truffle mass was a way to restore the town’s church, which was in “bad shape,” said Poron.

Truffles on the alter in Richerenches.

In 1982, a black truffle brotherhood — made up mostly of truffle brokers and farmers — was created. Every year since, the brotherhood, in full ceremonial garb, comes together to pray for a good harvest.

The annual truffle mass, where black truffles are donated to the local church.

The highlight of the truffle mass is when the offering basket is passed around. Instead of cash, nuggets of black diamonds are donated and auctioned off in honor of the church.