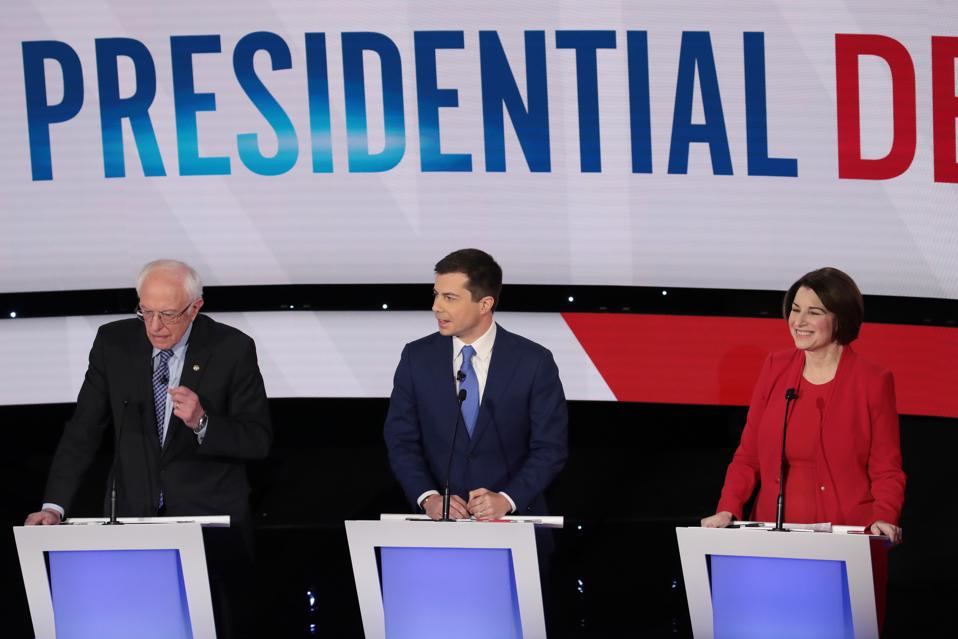 Two days ago, I noted there had been little mention in the Democratic debates of the trillion-dollar deficits being run up by the Trump administration. That discussion finally started last night after moderator Abby Phillip asked Sen. Bernie Sanders how he would finance his proposals to double existing federal spending. Several candidates weighed in, offering insight into how their management of the federal budget would differ from one another, as well as with President Trump.

Sanders rejected the premise of the question and insisted that his Medicare-for-All plan would actually reduce total health-care spending in the United States. The reality, however, is that – despite embracing almost every tax hike imaginable – Sanders hasn’t come up with a credible plan to finance even half of the more than $50 trillion in additional spending he’s proposed over the next 10 years. Sen. Elizabeth Warren, who has made enacting a federal wealth tax one of the central pillars of her campaign, said that some of the revenue from this tax could be used to pay down the growing national debt.

The problem here is that Warren – like Sanders – has already pre-committed every dollar of her wealth tax (and other revenue proposals) to new spending. Major federal programs, including Social Security and Medicare, are facing growing shortfalls due to our ageing population and the Trump administration’s reckless tax-cut and spending policies. As a result, the next president will likely inherit a 10-year deficit of almost $17 trillion. How could Warren or Sanders hope to pay for the promises our government is already making after they’ve tapped every revenue source they conceivably can to pay for new spending?

Sen. Amy Klobuchar offered voters a more-pragmatic alternative in the debate. When it was her chance to weigh in on the budget, Klobuchar argued that she was the only candidate who explicitly calls for using some of the revenue raised by repealing Trump’s tax cut policies for deficit reduction rather than for new spending. She then rattled off a list of specific tax increases she favors.

Also championing fiscal realism in the debate was former Mayor Pete Buttigieg. He challenged the notion peddled by some on the left that “the bigness of plans only consists of how many trillions of dollars they put through the Treasury, [or] that the boldness of a plan only consists of how many Americans it can alienate.” Buttigieg also used the opportunity to argue that Democrats should campaign on fiscal responsibility – an argument he’s been making since last year.

“Our party should no longer hesitate to talk about the issue of the debt and the deficit,” said Buttigieg. “Now, we’ve got a dramatically better track record on it than Republicans do. In my lifetime, it’s almost invariably Republican presidents who have added to the deficit, a trillion dollars under this president. And it’s why everything I’ve put forward — from Medicare for all who want it to the historic investments we’re going to make in infrastructure to dealing with climate change — is fully paid for.”

When asked why he didn’t support Warren and Sanders’ proposals for free college, Buttigieg added that responsibly managing public finances requires prioritizing investments where they can do the most good.

“There is a very real choice about what we do with every single taxpayer dollar that we raise, and we need to be using that to support everybody, whether you go to college or not, making sure that Americans can thrive, investing in infrastructure, and something that hasn’t come up very much tonight but deserves a lot of attention, poverty,” said Buttigieg. “We’ve got to be making sure that we target our tax dollars where they will make the biggest difference. And I don’t think subsidizing the children of millionaires and billionaires to pay absolutely zero in tuition at public colleges is the best use of those scarce taxpayer dollars.”

The governing philosophy touted by Buttigieg and Klobuchar presents a welcome contrast just one day after the Treasury Department announced the federal government spent $1 trillion more than it raised in revenue in 2019. If current policies remain in place, the national debt could surpass the all-time high it reached as a percent of gross domestic product at the end of World War II by 2030. Last night’s debate showed the time is right for Democrats to offer voters a progressive agenda that also pays the bills.