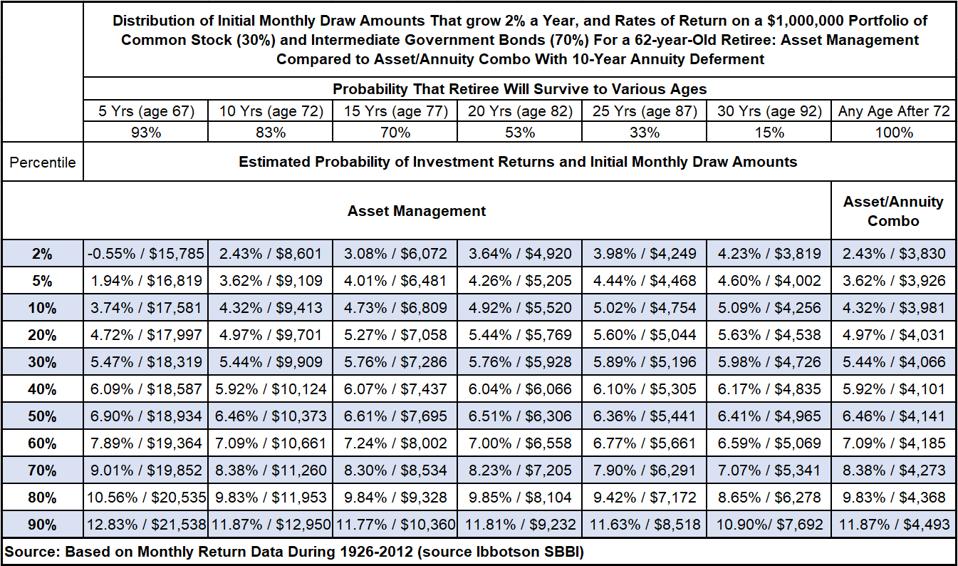 One of the unanticipated effects of the pandemic is that it has induced millions of workers to retire early. John, for example, who is now 62, had previously expected to work until 65 or 68. He has $1 million of financial assets, which makes him better off than many of the involuntary retirees, and the investment advisor he consulted suggested that he place 30% of his assets in common stock and 70% in interest-bearing securities. Yet the advisor cannot answer his major question: how much spendable funds can he draw safely, without the fear of running out of assets while he is still alive?

Decisions bearing on this question should be informed. An informed decision is one based on a known or estimated probability of outcomes. If the probabilities are not known, the decision is uninformed.

The decisions by retirees regarding how much they can safely draw is largely uninformed. This is the case whether the retiree follows her own instincts or relies on a financial advisor for an answer. Yet to a very large extent, these uninformed decisions can be converted into informed decisions. How to do that is the major purpose of this article.

Also known is the estimated probability of different rates of return, over periods of varying length, based on the past history of rates of return on similar portfolios. This is shown in the lower section of the table. For any given period, the distribution of rates with their probabilities also shows the distribution of draw amounts having the same probabilities. The draw amounts shown are the initial amounts subject to an inflation adjustment of 2% a year.

Suppose John’s cardiologist tells him that he will surely die in 5 years or less. That bad news would at least simplify his decision regarding how much of his assets he could safely draw each month. His decision process could be based entirely on the rate of return on his portfolio over 5 years.

As shown in the table, the median rate of return over a large number of 5-year periods was 6.90%. If that rate materialized, he could draw $18,934 each month for 60 months and die penniless.

Drawing the median amount would be imprudent, however, because in half of the 5-year periods, the rate of return is less than 6.9%. Indeed, there is a 2% probability that the rate will be negative (-.55%). If John drew a payment based on a 6.9% rate and the realized rate turned out negative, he would become penniless before he died. It is plausible, therefore, that John would avoid that risk by drawing less — $15,785 would last for the full 5 years even if the rate of return was as low as -.55%.

Suppose that John’s cardiologist emails him with surprising news: he mixed up the medical charts and John’s health is fine — he might live to 92 in fact.

The flip side of this good news is that the longer he expects to live, the less he can safely draw. If he assumes that he will live 30 more years to age 92, the median return of 6.41% over 30-year periods would support an initial draw of $4965 a month.

In this case John would face 2 risks. One risk, as explained earlier, is that John’s realized return will be less than the median return. If he draws $4965 initially and the realized rate turns out to be less than 6.41%, his assets will run out before he hits 92.

The second risk is that he will live beyond age 92. The probability that this will happen is about 15%. Even if the median rate of return of 6.41% and the associated initial payment of $4965 are realized, John’s assets and monthly payment will drop to zero when he hits 93.

The analysis to this point has focused on how John’s initial retirement plan plays out over time. The reality is that as the realized rate of return diverges from the plan, and as he ages, he could adjust the monthly draw amount as needed, perhaps in consultation with a financial advisor. But retirees may not want to incur the expense of an investment advisor, and few want to spend their retirement years managing their portfolio. A needed reduction in the payment is troublesome, furthermore, and may be resisted. There is another way that many retirees might choose if offered the option.

An Alternative Approach: the Asset/Annuity Combo

The alternative reduces rate of return risk, eliminates mortality risk, and minimizes the need for surveillance. This alternative is a combination of asset management and annuity, and it is illustrated by the rightmost column of the table.

An asset-annuity combo would use John’s assets in two ways. Part of his assets is used to purchase a deferred annuity, which is paid for upfront but doesn’t start paying the retiree until a specified deferment period is over. In the case shown in the table, the deferment period is 10 years. Starting year 11, John will begin receiving annuity payments for life, which eliminates the risk of living too long.

The remainder of John’s assets are used to provide spendable funds during the 10-year deferment period. He is subject to rate of return risk during this period, but it is much reduced and more manageable than being dependent on asset draws over his remaining life. This is reflected in its smaller variance in initial draw amounts over different rates of return.

The technology used to deliver the combo, developed by my colleague Allan Redstone, provides a seamless transition from asset-draws to annuities, along with a pre-specified inflation adjustment. It incorporates HECM reverse mortgages where it is relevant for a retiree.

Retirees who place high value on leaving funds to an estate can easily modify a combo plan by segregating a part of their assets which would not be used in determining the amount of spendable fund draws. These “set-aside” assets targeted to the estate could be made available only in the event that the rate of return falls short of the rate assumed in calculating draw amounts.

The combo is not needed by retirees with sufficient wealth that their retirement spending would not be affected either by unexpected changes in rates of return on financial assets or by living well past their expected life. The target is the much larger group of retirees like John, who have limited wealth and want to draw the largest possible flow of spendable funds from it with no risk of ever running out.