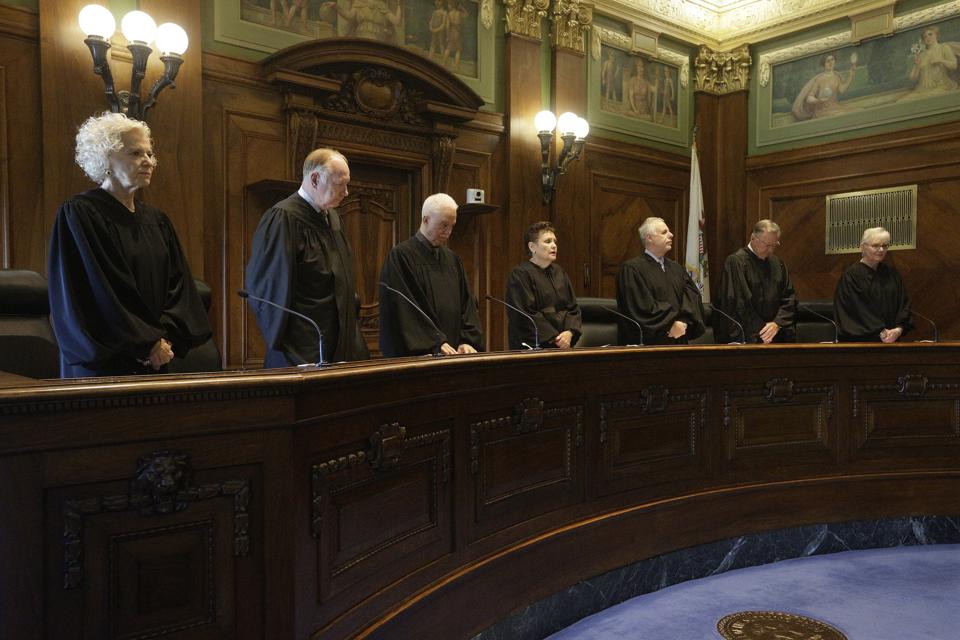 Earlier this week, I griped that an Illinois State Senator, Heather Steans, had claimed that the state had solved its pension problem except for the pesky issue of legacy costs. Governor JB Pritzker, too, has claimed that there’s nothing to be done except to find more money, and Chicago Mayor Lori Lightfoot’s vaguely worded statements about the matter don’t amount to anything more, either.

But it seems about time for a deep dive into a narrow question: what did the Illinois Supreme Court have to say about pensions? It’s the sort of thing that seems very nit-picky but is actually very relevant to the situation in Illinois.

As a refresher, Illinois’ 1970 constitution is one of only in two in the nation which explicitly guarantee that state and local employees have a right to pension benefits based on the formula in effect at hire, without reduction, until retirement. (The other is New York.) This is via the “pension protection clause,” Article XIII, General Provisions, Section 5,

“Membership in any pension or retirement system of the State, any unit of local government or school district, or any agency or instrumentality thereof, shall be an enforceable contractual relationship, the benefits of which shall not be diminished or impaired.”

This is not a part of some grand principle, but tossed in as a miscellaneous item among the text of the oath of office, the authorization of state funding of public transportation, and the requirement of a supermajority for the authorization of branch banking by the General Assembly.

In 2013, Illinois passed legislation which aimed to reduce pension liabilities, but various groups representing the affected employees filed suit, and the Supreme Court overturned the legislation in a 2015 decision. This decision recapped not merely the 2013 decision, but included more extensive commentary on Illinois pensions, citing, for example, 1917 and 1957 reports characterizing state and local pension plans as in a condition of insolvency, and a 1969 overall funded status of 41.8%.

The first thing that the Court makes clear in its decision is that the 1970 constitution bound Illinoisians to provide undiminished and unimpaired pensions to every state or local worker ever hired with such a promise, with no room for any changes whatsoever. Yes, it uses the language, technically true, that it was the people of Illinois who, in voting for the constitution, restricted the General Assembly from making any such changes, rather than acknowledging that those people were rather powerless to evaluate any such individual provision agreed to by the delegates drafting the constitution once it was put up for a vote. (In fact, on only four topics were voters given the ability to vote individually, vs. an all-or-nothing up-or-down vote: cumulative voting for the legislature, election of judges, capital punishment, and the vote for 18 year olds. The constitution itself was ratified by vote of 57%, with a turnout of 37% of voters in a special election in December, which all makes it a bit insulting for the Court to proclaim that it was the People of Illinois who asserted their will in this manner.)

The decision asserts, in short, that the delegates knew full well that pensions were not properly funded, and intentionally made the choice to guarantee pensions by means of obliging future generations to pay, no matter what, rather than funding them as they are accrued.

In fact, the text cites multiple attempts to provide some alternate language to the constitution’s blanket statement, which did not succeed:

“We note, moreover, that after the drafters of the 1970 Constitution initially approved the pension protection clause, a proposal was submitted to Delegate Green by the chairperson of the Illinois Public Employees Pension Laws Commission, an organization established by the General Assembly to, inter alia, offer recommendations regarding the impact of proposed pension legislation. . . . It recommended that additional introductory language be added specifying that the rights conferred thereunder were ‘[s]ubject to the authority of the General Assembly to enact reasonable modifications in employee rates of contribution, minimum service requirements and the provisions pertaining to the fiscal soundness of the retirement systems.’

“Delegate Green subsequently advised the chairman that he would not offer it because ‘he could get no additional delegate support for the proposed amendment.’ . . . Shortly thereafter, a member of the Pension Laws Commission sent a follow-up letter to Delegate Green requesting that he read a statement into the convention record expressing the view that the new provision should not be interpreted as reflecting an intent to withdraw from the legislature ‘the authority to make reasonable adjustments or modifications in respect to employee and employer rates of contribution, qualifying service and benefit conditions, and other changes designed to assure the financial stability of pension and retirement funds’ and that ‘[i]f the provision is interpreted to preclude any legislative changes which may in some incidental way ‘diminish or impair’ pension benefits it would unnecessarily interfere with a desirable measure of legislative discretion to adopt necessary amendments occasioned by changing economic conditions or other sound reasons.’ . . . . This effort also proved unsuccessful. The statement was not read and no action was taken during the convention to include language allowing a reasonable power of legislative modification” (p 21 – 22).

The Court also rejected the use of the state’s “police power” to reduce pensions, that is, the notion that the greater need to provide basic services could justify reducing pensions, noting that other provisions in the constitution included wording qualifying the promises made as subject to affordability, but that the pension protection wording was absolute. In addition, the 1970 constitution, and its drafters, cared not in the least for pension funding, only that the benefits are paid out to retirees; and the legislature, in its 2013 benefits-reduction legislation, was not making the case that it could not pay benefits which were due, but that the burden placed on the state budget of prefunding those benefits was too great. In fact, the Court even proposed that a reamortization schedule would have been sufficient to avoid a funding burden (p. 20) — that is, rejecting the notion that there is any particular urgency to funding pension liabilities at any particular level at any particular point in time.

It’s all, I suppose, a trick of assuming that there is a singular People of Illinois who, through their ratification of the constitution, promised to pay future benefits when they come due, rather than recognizing that the People of 1970 (presumably quite unknowingly) restricted future generations of Illinoisians by forcing them to make these payments without limitation.

But here’s some good news:

The Court’s decision emphasizes over and over again that what binds the General Assembly and the people of Illinois are the key words of Article 13, Section 5, “ the benefits of which shall not be diminished or impaired.” It’s a simple ruling: you can’t do anything which has the effect of reducing existing or future benefits (and the guarantee of a future Cost of Living Adjustment is included in such promises) so long as this phrase exists in the Illinois constitution.

This is a much narrower claim than some have made, including Gov. JB Pritzker himself, that those future accruals are guaranteed under the contracts clause of the United States Constitution, or by applying basic principles of justice and fairness, so that an amendment could never actually accomplish its purpose. Rather, the Illinois Supreme Court says that the constitution-writers intentionally gave pensions an elevated level of protection beyond what the U.S. Constitution requires via this clause. Here’s the key text:

“The pension protection clause clearly states: ‘[m]embership in any pension or retirement system of the State *** shall be an enforceable contractual relationship, the benefits of which shall not be diminished or impaired.’ (Emphasis added [in the decision text].) Ill. Const. 1970, art. XIII, § 5. This clause has been construed by our court on numerous occasions, most recently in Kanerva v. Weems, 2014 IL 115811. We held in that case that the clause means precisely what it says: ‘if something qualifies as a benefit of the enforceable contractual relationship resulting from membership in one of the State’s pension or retirement systems, it cannot be diminished or impaired’” (p. 14).

In other words, the key words that the Court emphasizes are “diminished or impaired,” not “enforceable contractual relationship.”

In the end, my reading of this decision says that the Court gave Illinois voters a roadmap to pension reform: there is only one path forward, that of an amendment, but it is at the same time, it is a travelable path, achievable if there is sufficient political will or grassroots support. Unfortunately, we know there is no political will, on the part of those currently in power. What the grassroots Illinoisians think about it is another question.

What do you think? You’re invited to comment at JaneTheActuary.com!