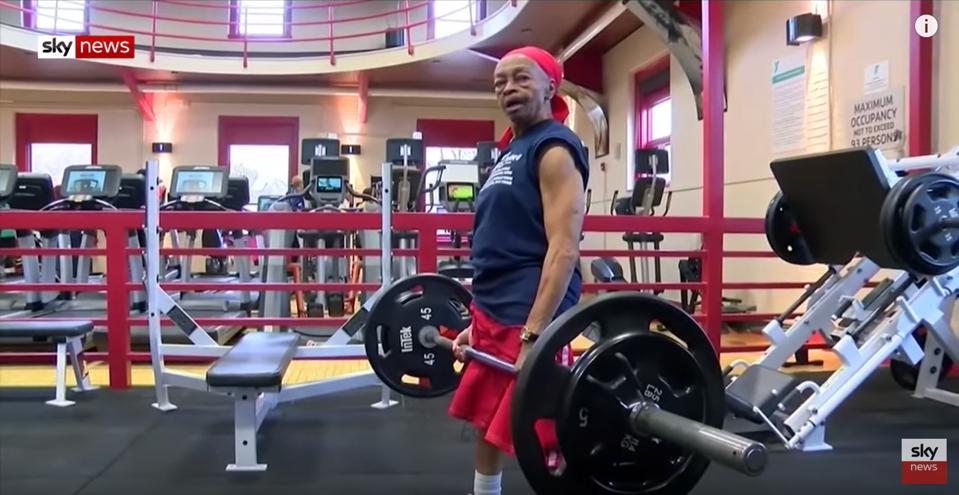 Healthy aging stories always inspire me, especially about older athletes. This one was a jaw-dropper, unlike anything I’ve ever seen. As reported by CNN and New York affiliate WHAM, a man broke into the house of 82 year old Willie Murphy, first trying to fool her that he was ill and needed an ambulance. She called the police, and when she wouldn’t let him in he angrily broke open the door. Undoubtedly, he never expected the 105 pound woman inside, alone in semi-darkness to take him on, but that’s exactly what she did. Grabbing the first thing she could—a table—she promptly smashed it over him, breaking it. She used the metal table legs to beat him to the floor. She jumped on him a couple of times, took a bottle of baby shampoo and poured it into his eyes, and then grabbed a broom and kept hitting him. The intruder had made a bad pick, the home of a very strong, award winning powerlifter who works out at the YMCA nearly every day. Little dynamo Ms. Murphy can deadlift 225 pounds. The police arrived and the man was sent to the hospital in an ambulance. Ironically, he tried to gain entry by saying he needed an ambulance, exactly what he ended up getting. According to the reports, the man was probably relieved to get out of that house.

Willie Murphy is one rare example of a way to age that fends off frailty, keeps her engaged, socially active with friends at the gym and proud of what she can do. While not many people over 65 would take on power lifting as a main pursuit in life, her message is that we should all do “some form of exercise”. To get that across, she spends time volunteering at her local health clinic and once a month, she goes to the Anthony L. Jordan Health Center in Rochester and helps older people exercise with simple resources such as chairs and steps.

What about all the rest of American adults who don’t have any inclinations to power lift? the National Institutes of Health tells us that 60 minutes of moderate- to vigorous-intensity activity on most days of the week will help adults avoid gradual weight gain. You don’t have to do it all at once either, as it’s just as effective to spread it out in shorter periods over the day. As for older adults, I like the recommendations of the National Institute on Aging, Go4Life. They illustrate a simple, achievable series of movements anyone can do at home without much equipment, some while sitting. The goal is to build endurance, strength, balance and flexibility. Not everyone can be as tough and powerful as Willie Murphy but everyone can do better than being sedentary. Right now is a good time to start!