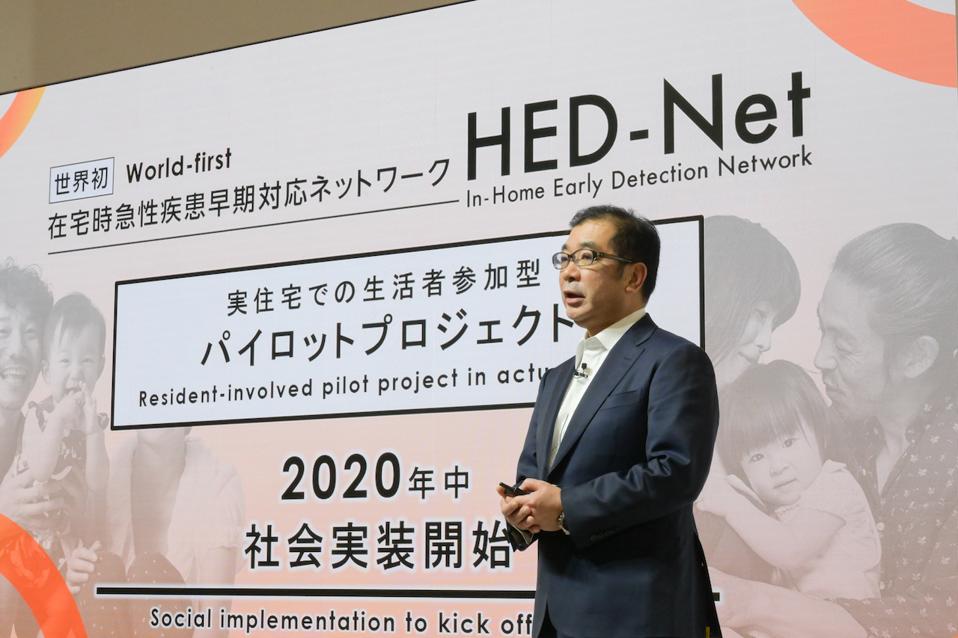 Japanese developer Sekisui House doubled down last week at CES on its imminent roll-out of a game-changing—life-altering—smart home health technology.

Sekisui House’s foray offers a sensor-centric early-detection and split-second ambulance response solution that triggers at the onset of acute health events such as strokes at home. The initiative comes as data and technology’s multi-billion-dollar smart home space race intensifies, with soaring stakes for winners and losers.

For Alphabet, Amazon, Apple and a countless host of others large and small, today’s IoT feeding frenzy is as much a dog-eat-dog bid for primacy over who “owns” consumer decision-making and buying behavior on the home front as it is for the booming sales of connected devices and smart home solutions. The new decade—it became clear at CES last week—arrives at an inflection point.

Consumer Technlogy Association data projects step-change growth of 4% in 2020, with overall sales to consumers of $420 billion for connected devices, solutions, and platforms. Even so, two questions cloud potential for a quantum leap ahead.

One is a matter of value. The other, trust.

The first question is about what people need versus what they prefer to have installed in the homes they buy. When it comes to smart home gizmos, gadgetry, geolocational data, artificial intelligence, algorithms, and their daily routines, home security—connected locks, cameras, door-bells, etc.—and remote home management solutions such as leak detection come closest to fulfilling real-world needs. To-date, though, they fall a tad short of non-negotiable home features like electricity, heat, drinkable running water, etc.

The second issue applies to an increasingly sensitive, iffy trade-off for consumers: The menacing risk [of lost or stolen privacy] versus life-or-death benefits at this crossroads of sensors, personal bio data, and the intimate routines and conditions of life at home. Home hacks—via connected speakers, doorbells, thermostats, and other home IoT nodes—have become a deeply troubling thing. Peace-of-mind, sanctuary, safety—the primal basics of what people expect in their homes—have become prone to random attack, misappropriation, and intrusion.

For Sekisui House, a pure-play real estate developer and builder, home early detection, a technology-enabled human medical response network (HED-Net) it will move from its research labs to a pilot in real-live homes in 2020, addresses each question separately and dramatically.

“HED-Net detects and analyzes residents’ vital data at home without contact,” according to a Sekisui House statement. “If abnormalities that suggest the onset of an acute illness are detected, an emergency call center is alerted. The operator immediately performs a safety check by speaking to the resident through the home’s speaker, and if the result is indeed an abnormality, the operator calls an ambulance. Upon confirming a paramedic’s arrival, the operator remotely unlocks the front door, all from a central location. HED-Net is the first network of its kind in the world. Sekisui House has acquired a patent in Japan for this service as a ‘safety check system,’ and are now filing an international patent application.”

The No. 1 residential builder in the world’s idea is to leap-frog “nice-to-have” smart home solutions in favor of ones people wind up feeling they can’t afford not to have in their homes. Sekisui House has laser-focused its R&D dice-roll on a more structural, “must-have” technology, the identical mind-set behind its structural engineering innovation investments for seismic, super-storm, and fire safety.

The firm’s intent is to embed in its homes a technological platform—paired with a human ecosystem of critical first-responders—that coincides with one of human history’s most powerful surging demographic tides: aging populations and their ability to live in place at home.

Sekisui House first announced its plans—and a big research and development venture called Platform House, among partners consisting of Japan-based medical researchers, technologists, and call-centers—at CES in 2019. The goal of the venture is to get out in front of its fast-emerging “100 year-old” society—an accelerating elderly population demographic—with an advanced early-illness detection service suite called Platform House. Underlying health data are evidence of an increasingly urgent need—upwards of 800,000 Americans have had strokes, and their annual death-toll is 140,000 in the U.S. By 2030, Harvard’s Joint Center for Housing Studies says that 10% of U.S. households will be headed by 80-plus year-olds. The cost—to individuals, their families and caregivers, and society—is a potential tsunami.

At the same time, the CTA notes it expects that smart doorbells and locks, Wi-Fi cameras, smart thermostats, smart smoke and carbon monoxide detectors, and smart home security kits, and other smart home device sales will reach 35.2 million units (15% growth) and $4.3 billion (4% increase) in 2020. What’s more, unit sales of smart speakers, such as Google Home, Amazon Echo or Apple HomePod, are projected to reach 39 million units sold (up 5% over last year) and $4.2 billion in revenue (14% increase) in 2020.

According to its statement, Sekisui House seeks to advance the Platform House Concept by developing other services focusing on “monitoring chronological changes” and “in-home prevention,” using vital data collected at home. While upgrading HED-Net and collecting vital data at home, Sekisui House will conduct R&D on contact-less monitoring methods to identify disease risks early from “chronological changes.” Also, the company aims to provide personalized “preventive care” services that can preemptively identify the risk of onset for diseases through analyzing resident’s vital data, and residential environment data, from a medical perspective.

“The absolute privacy of resident and patient data is a critical priority in our work,” said Otsuki Tomoaki, Ph.D., a professor at Tokyo-based Keio University’s Department of Information and Computer Science. Dr. Tomoaki’s university department and hospital participate as partners in the Sekisui House HED-Net ecosystem of tech, medical serivces, and call center services providers. “We have to be able to deliver these services without compromising the privacy rights of residents.”

That sacrosanct promise is Sekisui House’s aim to deliver on the trust aspect of its new technology offering. As for the “must-have” value, another Sekisui House partner, Brian W. Anthony, a principal research scientist in MIT’s Department of Mechanical Engineering and Institute for Medical Engineering and Science (IMES), speaks to what’s in the works as Sekisui House pushes the smart home technology across the divide, from “nice-to-have” to “must-have” home functionality.

““We’re at the beginning of what we could do with laser ultrasound,” says MIT’s Dr. Anthony. “Imagine we get to a point where we can do everything ultrasound can do now, but at a distance. This gives you a whole new way of seeing organs inside the body and determining properties of deep tissue, without making contact with the patient.”